Column: The tube according to Osama 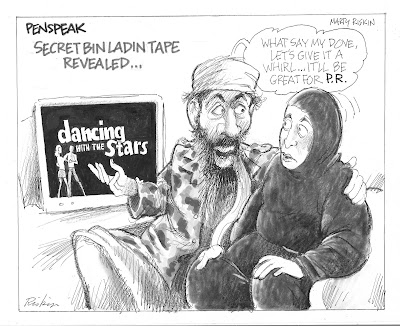 Fox News “falls into the abyss as you know, and lacks neutrality too.” CNN “seems to be in cooperation with the government more than others.” That was how Al Qaeda … rated several American TV news outlets, according to documents made public today.

– Los Angeles Times, May 3
***
To: The Joint Chiefs of Staff
From: Combating Terrorism Center
Regarding: Osama bin Laden’s journals

Although reports have attributed critiques of American news networks to an Al Qaeda operative, Osama bin Laden’s personal journals — confiscated following the raid on his compound in Abbottabad, Pakistan — would seem to indicate that the criticisms may actually have come from bin Laden, who apparently spent several years in his bunker doing nothing but watching American television.

Following are 10 of bin Laden’s journal excerpts that bolster this opinion, for your eyes only:
1) “Fox and Friends is as lacking in neutrality as the rest of the network’s programming, which is emblematic of the American arrogance and hubris. And who is doing the picking of Brian Kilmeade’s neckties? That person should be beheaded and his body defiled.”

2) “Two and a Half Men: Ashton Kutcher, bah! I have a mind to order a fatwa against him, because of his conceit in believing he could take the place of Charlie Sheen, and also because I feel that eventually he will hurt Demi, whom I loved in ‘Striptease’ and would gladly make one of my many wives.”

3) “The Big Bang Theory: These wispy faux men would not last for a day in my ranks. Also, the one who argues that Superman is mightier than Green Lantern is foolish beyond all folly. Death to him!”
4) “House: I find this surly physician appealing! Also, he made me realize that I may have hereditary hemorrhagic telangiectasia. (Although my wives have thought I was a hypochondriac ever since I got obsessively neat after watching that Monk marathon last year. Curse them … Demi would believe in my ailments!)”

5) “Glee: This show is so gay. In fact, these are some of the happiest people I’ve ever seen on television. Praise be to Glee!”

6) “The O’Reilly Factor: What is this No-Spin Zone he speaks of endlessly? I am beginning to think it is not a real place.”

7) “Undercover Boss: I once did this with my new recruits — masqueraded as one of them so I could see how truly dedicated they were to our glorious cause. Until one of the lieutenants tried to strap a bomb on me, and I was like ‘Hey, Osama here! Undercover boss! Good job, carry on everybody!’”

8) “The Tonight Show with Jay Leno: “It is not fair that Americans should enjoy quality late-night humor while our brothers around the world are experiencing comedy of the most miserable level. Based on this, with the permission of God, we will continue to inflict Jay Leno upon you until the suffering of our people abates.”

10) “The Voice: Terrible — these people have the voices of a hundred spitting camels being mauled to death by a Caspian tiger. Except for Dia Frampton, whose tones are like a blessed emissary of Allah and whom I would like to be one of my virgins when I arrive in paradise, many, many years from now. Oops, hold on, someone’s at the door.”

A version of this column originally appeared at CAP News. Check out other satire from me and CAP in “Net's Best Satire, Vol. 1,” available at Amazon and BN.com.