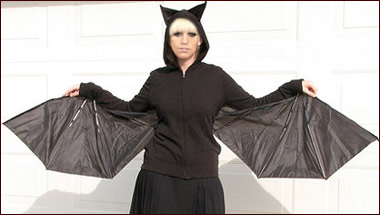 "While we realize that Dr. Kirk Langstrom was just trying to cure his own deafness when he developed his bat sonar extract, the fact remains that it turned him into a hideous man-sized bat hell-bent on mindless destruction," read a statement from the Islam Defenders Front.

"Now, in addition to promoting pornography and satanic values with her music, Lady Gaga is putting the entire population of Jakarta at risk of being terrorized by Man-Bat, and possibly his wife, Francine Langstrom, a.k.a. She-Bat," the statement continued.

News of the postponement has devastated Indonesian fans, who had been clamoring for a live Lady Gaga/Man-Bat collaboration for years.

"Boy George was on the bill too, but we weren't as excited about that," noted diehard Gaga fan Daren Sibarani, who had planned to welcome Gaga and Man-Bat with a flash mob of 124 students, half of them dressed as bats, the other half wearing meat.

The tour was to have had several stops in Indonesia featuring various performers in addition to Lady Gaga, Man-Bat and Boy George. These included She-Hulk, Boyz II Men, Lady Antebellum and Man Ray, the late avant-garde Dadaist photographer.

"Not Man Ray the SpongeBob SquarePants character," noted Sibarani. "That would just be silly."

Gaga, for her part, has said she thinks the hardline groups are overreacting, noting that every time Man-Bat has gone on a rampage previously, he's been fairly easily subdued by Batman and his companion, Robin the Boy Wonder.

Batman and Robin have both gone on the record as being big Lady Gaga fans, and have reportedly even consulted with her on her fashion choices, particularly the ones involving black molded rubber.

"And I think it's just wonderful what she's done for the LGBT community," said Batman, re-polishing his hard rubber codpiece. "Not that Robin and I would have any sort of vested interest in that."

Batman's promises to protect Indonesia from the Man-Bat weren't enough for the Islam Defenders Front, however.

"We refuse to place the safety of the people of Jakarta in the hands of a vigilante like The Batman," stated an IDF spokesman, "and besides, Lady Gaga is still promoting pornography and satanic values whether Man-Bat goes on a rampage or not."

"Ugh, I hate it when people call me The Batman," responded Batman.