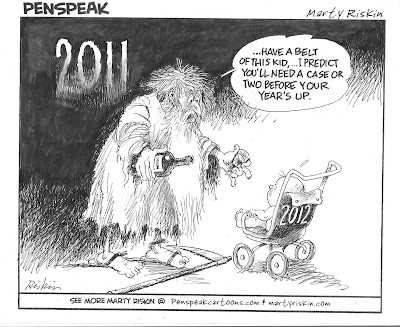 I know many of you have probably given up on my annual predictions, considering how every time I revisit them a year later it turns out I was pretty much completely wrong. But keep in mind that my record puts me in some fine company, including most weather forecasters, a fair number of political pundits and whoever thought another reboot of “Charlie’s Angels” was a good idea.

With that in mind, here’s a look back on my annual predictions from a year ago. I’ll skip the one about “Charlie’s Angels.”

1) “From Egypt to Tunisia to Libya to Wall Street, everyone will be pretty satisfied with how things are being handled. Nothing to see here!” It didn’t work out that way, but who would have thought people would actually get off their couches? Especially here in America, where “NCIS” was on.

2) “Buoyed by President Obama’s faltering poll numbers, the GOP will field a stellar lineup of potential 2012 presidential candidates, each one more brilliant and impressive than the next.” This didn’t quite pan out, but in my defense, I did predict that at least one of the candidates would be extremely fond of pizza. Granted, I was actually thinking of Chris Christie.

4) “It took three years, but the economy will finally rebound to its full strength, resulting in a dramatic increase in well-paying jobs for middle-class workers.” OK, maybe that didn’t quite happen, but at least I was right about all the executives getting larger bonuses.

5) “This will be the year that Kim Kardashian finds true, lasting love, just like Demi Moore and Ashton Kutcher, Arnold Schwarzennegger and Maria Shriver and Katy Perry and Russell Brand.” I may have seemed off on this one, but I should point out that many of the above listed people did find love, just not with each other.

6) “New Kids on the Block and the Backstreet Boys will join forces and shock the world by finding and killing Osama bin Laden.” Very close on this one — the two bands did tour together, but it was actually SEAL Team 6 that got bin Laden. In defense of NKOTBSB, though, they did sell out two nights at Mohegan Sun, and have a kickin’ acronym.

7) “I have a feeling this will be a big year for the Red Sox!” Well, they did have a better year than Penn State.

8) “Repulsed by the very idea of ‘The Smurfs,’ movie audiences will instead flock to hits like ‘Mars Needs Moms,’ ‘Arthur’ and ‘Green Lantern.’” Damn those little blue buggers! Although as one of the eight people who actually saw “Mars Needs Moms,” I can say pretty unequivocally that Mars definitely did not need moms.

9) “A mundane weather year will bolster the assertion that climate change may not actually exist.” Well, it’s possible that all those floods, tornadoes, unseasonable blizzards, earthquakes, heat waves and tsunamis could have just been a coincidence. Or heavenly retribution for our unrepentant sinning. One of those two things.

10) “I have a feeling this will be a big year for rising political star Rep. Anthony Weiner, D-NY!” I guess the veracity of this prediction revolves around your definition of “big.” Although frankly I’d rather not think about it.

11) “Yes, I’ve predicted every year since 1996 that this would be the year that Charlie Sheen gets his act together, and he keeps letting me down, in much the same way he’s let down his various wives and the hookers he’s trapped in hotel bathrooms. But that’s all in the past — this will be the year that Charlie shows us he’s both a serious actor and a fine humanitarian.” Let’s move on.

12) “Faced with alarming deficits and other issues in need of addressing, Congress will finally learn to work together in a bipartisan fashion to solve the nation’s HAHAHAHAHAHAHAHA!!” Nope, I couldn’t keep a straight face about it then either.