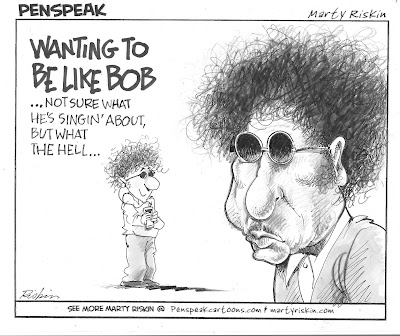 Listening to “Chimes of Freedom,” the new 76-song Bob Dylan tribute to celebrate the 50th anniversary of Amnesty International (motto: “Keeping You Out of Jail Since 1962”), is almost a stream-of-consciousness experience. There are so many styles — rock, punk, folk, country, reggae, cabaret and even classical are all represented — you sometimes feel like you’ve accidentally stumbled into the most way-out coffeehouse in some alternate-universe Greenwich Village, sitting on a beanbag chair between Sinead O’Connor and the Kronos Quartet.

Two overarching impressions become clear fairly quickly: One, it really is impossible to ruin a Bob Dylan song (although he’s mangled a few himself over the years), and two, none of these manages the tricky task of surpassing the original. Beyond that, it’s probably best to just pull up a beanbag and let the impressions flow:

Johnny Cash’s newly recorded duet of “One Too Many Mornings” with the Avett Brothers shows that he’s the best-sounding dead guy still releasing records. (Sorry, Elvis.)

How does Tom Morello get his guitar to make those noises? I think it may actually be a space alien he has trained as a pet.

I want to have Diana Krall and Elvis Costello over to dinner. I get the sense she’d hang politely on my every word, and he’d complain about the fish.

Yes, it’s impossible to ruin a Bob Dylan song. But Ke$ha comes close with “Don’t Think Twice It’s Alright” … I think she may have had stomach cramps. Or something else I don’t want to know about.

Seventy-six songs and no “Positively 4th Street”? They’ve got a lotta nerve.

All this time I wondered what “Love Sick” was missing, and now that I’ve heard Mariachi El Bronx’s version, finally I know: Maracas!

Mark Knopfler has sounded like he’s been waking up from a nap since 1995. That’s better than Sting, who’s apparently still asleep, and Jackson Browne, who’s in a medically induced coma. And judging from “Corinna, Corrina,” I fear Pete Townshend may have already shuffled off this mortal coil. RIP, Pete.

Wow, this is a really nice country version of “You’re Gonna Make Me Lonesome When You Go.” Wait, it’s Miley Cyrus? Excuse me while my head explodes.

It’s official: Everyone in the world has now covered “Make You Feel My Love.” But Adele’s may be the best. (Sorry, Billy Joel. And Garth Brooks. And Joan Osborne. And …)

A punk Dylan tribute needs to happen, judging by these versions of “Desolation Row” by My Chemical Romance, “Ballad of Hollis Brown” by Rise Against, “The Times They Are A-Changin’” by Flogging Molly and “Song to Woody” by Silverstein, all of which make me want to break something. I mean that in a good way.

Isn’t “I Shall Be Released” sort of the unofficial Amnesty theme song? So why is Maroon 5 singing it like it’s in the background of an Applebee’s commercial?

Michael Franti can’t believe he gets paid for this.

Eskimos must have hundreds of words for “boring,” because every one of them fits Kris Kristofferson’s version of “Quinn the Eskimo.”

Mick Hucknall and Jim James of My Morning Jacket need to have a Bob-off to see who does the best Dylan impersonation. Jimmy Fallon can be the judge. (He’s not on here, but he should be.)

Natasha Bedingfield can ring my bells anytime! Wait, that came out wrong.

Finally, even if the Dylan-cover soundtrack to “I’m Not There” is generally better, at $18 for the MP3 version of “Chimes of Freedom” you’re paying 23 cents per song — the majority of which are keepers — and supporting a good cause. Bob would want you to buy it.

And if you don’t, don’t blame me when you go to jail.

For a full track list and more information, visit amnestyusa.org. Peter Chianca is editor in chief for GateHouse Media New England’s north-of-Boston newspapers and websites. Follow him on Twitter at twitter.com/pchianca.