Column: To the moon, Newton! 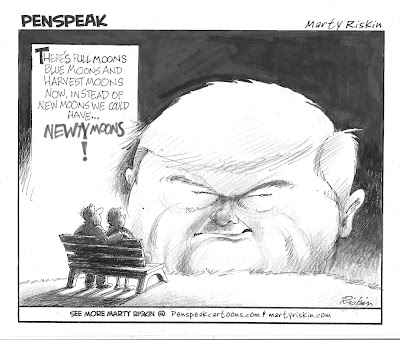 Hello and welcome to the Newton Leroy Gingrich Moon Base, the United States of America’s first fully functional moon colony and condominium complex!

As you know, this facility has been years in the making, started during President Gingrich’s first term in office as U.S. president and completed just last year, fortunately prior to the Great Government Financial Meltdown of 2020. The president himself actually moved here even before finishing his final term, after thousands of angry but misguided homeless people chased him and his most recent First Lady, Lindsay Lohan Gingrich, from the White House.

We’re sure you will find living at Gingrich Moon Base to be enjoyable and relaxing, without hordes of former homeowners clogging the streets like in your neighborhood back home. But there are just a few simple rules all residents must follow to make life here safe and enjoyable for all.

1) Your security fee must be paid promptly upon your arrival. This helps to fund our police and security personnel, who are fully trained to protect us from itinerant space aliens and former homeowners who get here by hiding on the shuttle, and Mormons.

2) The building superintendent must supervise all moves to ensure that you don’t accidentally damage the airtight dome, causing the population of the colony to be sucked out into space. Doing so will result in a $500 fine.

3) Do not admit anybody into the dome except visitors who are expected and can be identified on the intercom. If a visitor says he is delivering flowers or has come to fix the sink, but sounds like his mouth is covered by an imposing black helmet and loud breathing apparatus, or like he just emerged from someone’s chest cavity, or that he lost his home on Earth, do not admit him or her without checking with the superintendent.

4) Aside from the twice-annual bus trip to the lunar poles, sunbathing is prohibited, except for Mrs. Gingrich when she’s working on her tan in a Barbarella-style silver catsuit. Mrowr!

5) Specific spaces are assigned for residents to store their jet packs. If you have a visitor, please make sure he or she does not park his or her jet pack in an area reserved for your neighbor. Also, please make sure the visitor didn’t just emerge from someone’s chest cavity. (See No. 3.)

6) When Rollerblading, golfing or bouncing along on the moon’s surface, stepping on Neil Armstrong’s footprints is strictly prohibited, even if it’s just to see if you have the same size foot as he does.

7) Do not ring both elevators at the same time. It’s annoying.

8) Waste disposal: Please remember that the lavatories and garbage disposals all flush upwards here. Fortunately it’s usually slow enough to get out of the way in time, but still, be vigilant, and always close the lid.

9) Dogs and cats are permitted, although they must be leashed at all times. Management is not responsible for pets or children that float away.

10) Some believe that dozens of monkeys were sent secretly to the moon by the USSR in the late 1960s, and that they have taken refuge in underground moon caves, where their numbers have grown as they plot their revenge on the humans who sent them here. This is simply an “urban legend.” However, if you see monkeys coming, run.

11) If someone is believed to be in violation of any of the provisions of the declarations and bylaws or the rules and regulations, those complaints can be brought directly to Mr. Gingrich, whose idea this was in the first place. But please keep in mind that even though life on the moon can sometimes be challenging, with the reduced gravity, the lack of plant or animal life and the great, choking storms of moon dust, it could be worse.

You could still be one of those poor suckers back on Earth.

I love it. Keep it coming.