No emergency! Nothing to see here! Unless there is 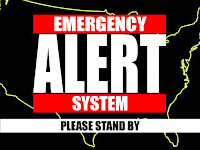 Please do not panic when the Emergency Alert System kicks in at 2 p.m. this afternoon. It's just a test to show how the government has everything completely under control. Well, most things. From the release:

On Nov. 9 the public will hear a message indicating, “This is a test.” The audio message will be the same for all EAS participants, however, due to the limitations in the EAS, the video text message scroll may not be the same or indicate that, “this is a test.”

So it's true that if you have the volume down, or are hearing impaired, there may be no evidence that it's a test, and you will assume that the missiles are on their way. But wait, there's more:

In addition, the background image that appears on video screens during an alert may indicate that “This is a test,” but in some instances there might not be an image at all. The test is expected to last three minutes.

But don't worry, the government has a plan:

FEMA and the FCC are reaching out to organizations representing people with hearing disabilities to better prepare that community for this national test.

So if you know any deaf people, please tell them to remain in bed. Also, let's hope this doesn't somehow end in a conversation like this: