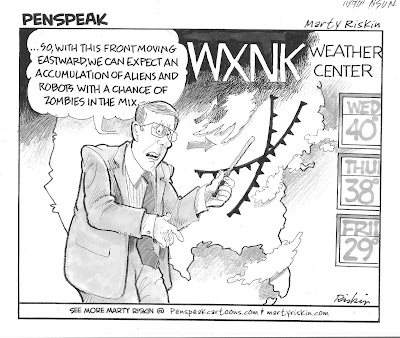 The power outages following the freak October snowstorm have revealed a few very important lessons: One, we need to protect our power lines from hazards such as tree limbs, stiff breezes and particularly heavy butterflies. But more importantly, we are woefully unprepared to go underground following the impending inevitable zombie, robot and/or alien invasion(s). I’m just saying.

I’m speaking of course of the people who are complaining about being without power for a measly five or six days, just because they don’t have heat or light and all their food went bad, including their insulin. These people need to buck up! (And yes, I realize this is coming from someone who suffered severe panic after losing cable for a couple days, but that was different, because it happened to me.)

I’m not just saying this because it’s become clear that our power companies now consider actually delivering the power to be optional, like a side of French fries, or yield signs. I’m saying it because the first thing that’s going to happen when the zombies, robots or aliens attack is that the lights will go out, and we’ll be left to fend for ourselves with just our wits, along with sharpened shovels, enormous gas fireballs or deadly Earth viruses, whichever is most appropriate for the occasion.

I know you may be thinking that I’m overreacting. “What are the chances of us actually being attacked by zombies, robots or space aliens?” you may ask. And while it may sound far-fetched, the chances are … wait, let me check my notes … 100 percent.

After all, just take a look at the latest development by scientists apparently eager to welcome our new robot overlords. At Seoul National University in South Korea, they’ve developed a Venus flytrap robot that traps bugs and converts their little bug bodies into electricity. This will clearly lead to a robot that will be impervious to our main defense against sentient killer man-machines, which is unplugging.

Personally, I question why any scientist would develop technology that would make it more attractive for robots to eventually want to eat us. Nature already has bears for that.

As for the aliens, researchers at Harvard and Princeton are so antsy about attracting aliens here to invade our cornfields and national parks that they’ve suggested we start scanning the universe for the artificial light given off by their cities, since apparently modern telescopes can tell the difference between light from a distant star and, say, an alien disco ball. Of course, this would require the aliens not to be living in underground cities inhabited by mutated creatures with psychic powers like in “Beneath the Planet of the Apes,” which, let’s face it, seems unlikely.

Still, next time the power goes out — which, given recent history, should be in about 20 minutes, or whenever a squirrel wanders into an electrical substation, whichever comes first — I think people should take the opportunity to embrace the rugged, survivalist, anti-robot side of their personality, just in case. Hunker down, board the windows, start luring in small rodents for food, and hope that if the choice comes down to converting us to electricity or displaying us in zoos, the robots and aliens (or robot-aliens) opt for the latter.