Column: 30 reasons to be thankful, sort of 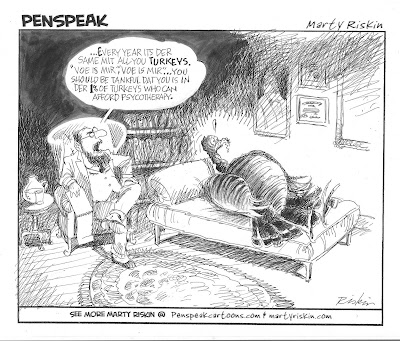 Some years back I kicked off an annual Thanksgiving-week tradition of listing reasons why people should be thankful. I figured that by 2011 compiling the list would be extremely easy, given that we’d all be millionaires traveling by jetpack.

Unfortunately it’s only gotten harder, but that’s not to say there isn’t room for hope. (And change, but mostly the hope part.) For instance, you should be thankful for the fact that:

1. Seal Team 6 has no reason to know where you live.

2. No one has “occupied” your driveway. Yet.

3. You’ve never had to work at the National Restaurant Association. Or if you have, at least you probably got a settlement.

4. Michele Obama hasn’t snuck up behind your kid and confiscated his Twinkies. Yet.

6. Rick Perry isn’t in charge of remembering your locker combination, or your email passwords, or your kids’ names.

9. Rupert Murdoch has no reason to know your voice mail number.

10. You didn’t have Eddie Murphy scheduled to host anything for you (kids’ birthday party, PTA spelling bee, bar mitzvah, etc.).

11. You’ve never been Tweeted by Anthony Weiner. Unless you have, in which case … Ew, gross.

12. Your power’s back on and you’re not trapped under a branch.

13. Michele Bachmann isn’t trying to pray away any of your personal traits. At least not to your face.

14. Your approval rating among your constituents is way above 9 percent, and that’s including your in-laws.

15. The last time you went to a Broadway show, Spider-Man didn’t fall on your head.

16. You don’t need approval from Congress to raise your debt ceiling. (Actually, that may not be such a good thing.)

17. Nancy Grace has no reason to know you exist.

18. You didn’t try to raise your prices 60 percent and figure nobody would notice.

19. Even if you’re not in a profession that features women in tiny shorts dancing around you while you do it, at least your job probably didn’t get canceled this year.

20. Nobody spotted you on the pier in Santa Monica.

21. The GOP isn’t twisting itself into a pretzel to find someone, anyone to nominate instead of you. (See numbers 3, 6 and 13, and Newt Gingrich.)

23. Even if you did get fired this year, at least you didn’t travel around the country doing a one-man show about it.

24. You’re not the guy left in charge of Apple.

25. No one is out to depose you. Or if they are, they’re probably not armed.

26. Donald Trump has absolutely no interest in your birth certificate.

27. Your wedding didn’t wind up being all about Pippa.

28. You got out of that corn maze without any help from local authorities.

29. Even in drag and a fat suit, you would still be more appealing than Adam Sandler in “Jack & Jill.”

30. At this very moment you may be unemployed, in foreclosure, being pepper-sprayed, floating on a rapidly melting ice flow and/or standing on a dais between Mitt Romney and Ron Paul — but no matter what, things are bound to get better in 2012!

Although you better stay on Nancy Grace’s good side, just in case.