AT LARGE: The Year in Fake News 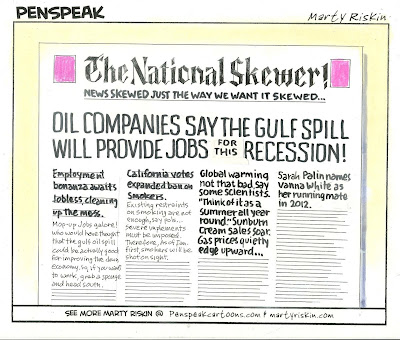 In case you missed our extensive fake news coverage from 2010, below are some of the top not-real stories of the year. View the rest in our Fake News Archive and at CAP News.

“Any device that can prevent terrorism while at the same time allowing you to see through people’s clothes is A-OK in our book,” said Nigel Friedrichsen, president of the Reno-based National Association of Perverts (NAP). “That’s the definition of win-win. Um … At least our definition.”

The scanners have been highly controversial, with some civil libertarians claiming the devices violate travelers’ privacy by performing a “virtual strip search.”

“Yes, it’s true the scans do expose the full bodies of the travelers who pass through them,” noted Friedrichsen. “Screeners would be able to see, say, under the brassieres of women age 16 to 35. Or into their underpants … their frilly, lacey underpants … Mm … I’m sorry, what were we talking about?”

The effort is clearly gaining ground: Newark Liberty Airport has announced it will install the scanners later this year. “They should be online in a few months,” said Chris Keller, a spokesman for the Port Authority of New York and New Jersey, noting they would not be instituting the procedure if it weren’t absolutely necessary.

“If you’ve ever been to Newark, you know you wouldn’t want to see under these people’s clothes unless you had to,” he said. “If anything you’d want to put more clothes on them.”

PHOENIX (CAP) — A new law that requires police to question people about their immigration status if they suspect they are in the country illegally should help curb the flow of illegal Irish, Polish and Swedish immigrants through U.S. borders, say supporters.

Maricopa County Sheriff Joe Arpaio, whose tough crackdowns have made him a hero in the anti-illegal immigration community, pointed out that the new law would not unfairly target Mexicans, as some of charged.

“The law gives police authority to question anyone they think is here illegally, not just people of Hispanic origin,” he pointed out. “So if someone is very pale and blond, that might be cause to investigate as to whether they’re here illegally from Sweden.

Besides skin shade and hair color, Arpaio said police will be trained to spot other characteristics that may denote whether someone might be in Arizona illegally. For instance:

While the new law has drawn protests around the state and the country, it has some high-profile supporters, such as Arizona Gov. Jan Brewer, who signed the bill. “Just look around,” said Gov. Brewer, gesturing to the angry crowds gathered in protest around the Arizona Capitol. “There are a lot of very swarthy people there, and I think police need the freedom to question them as to their status.”

When pointed out that the people could just be tanned as a result of living in Arizona, Brewer responded, “Can I see your papers, please?”

DETROIT (CAP) — Disgraced MLB umpire Jim Joyce made his second major faux pas in a week’s time, apparently hitting the gas instead of the brake in his 2002 Chevy Blazer and running over Tigers pitcher Armando Galarraga as he left Comerica Park.

“I don’t know how it happened,” said a teary-eyed Joyce afterward. “I had a really good angle on the pedals, and I would have swore it was the brake.”

“I say many times: Nobody’s perfect,” Galarraga said from his bed at Detroit’s Henry Ford Hospital, where he was being treated for multiple contusions. “Everybody makes a mistake. Unfortunately this one leave me out for the rest of the season, but I’m sure he no want to run me over, probably.”

Galarraga and Joyce of course made headlines when Joyce blew a crucial call at first base, robbing Galarraga of a perfect game with just one out to go in the ninth inning. The Detroit community has since rallied around Galarraga, with GM even presenting him with a brand new 2001 convertible.

“Unfortunately Jim [Joyce] backed into it at full speed after he run me over,” noted Galarraga, who said the car is now totaled. “But again, he just make a mistake. Like I make a mistake when I got out of bed that day, apparently.”

“I had a really good angle on [Galarraga’s car] in my rear view mirror, and I would have swore it wasn’t there,” said Joyce, dabbing his eyes and large, fu-manchu style moustache.

Meanwhile, calls to MLB Commissioner Bud Selig to reverse the call and award Galarraga his perfect game have yet to abate. Congressman John D. Dingell, D-Michigan, even introduced a Congressional Resolution urging Selig to do so.

“I figure if I can pull that off, maybe all the voters in Detroit will forget they don’t have jobs,” said Dingell.

September: Obama thanks pastor for not burning ‘my beloved Quran’

WASHINGTON (CAP) — In what some are calling a telling slip of the tongue, President Barack Obama Saturday thanked Gainesville, Fla. Minister Terry Jones for “not burning my beloved Quran, the true compilation of the verbal revelations given to the Holy Prophet Muhammad.”

He then paused for a moment and added, “Did I just say that out loud?”

Not surprisingly, Obama backtracked the next day, telling reporters he was just referring to the Quran’s importance to the Muslim religion, and not to his personal feelings about the book. “I certainly don’t ritually wash before I read it,” he noted. “Um, when I read it, that is. Which is never.”

He then pulled a copy of the King James Bible out of his desk drawer, and said, “If you don’t believe me, I’ll swear on a stack of these things — this holy book revered and read daily by us, you know, Christians.”

When reporters noted the Bible was still sealed in its plastic wrapper, Obama abruptly stopped taking questions, knelt on his hands and knees on the small rug in front of his desk to “find a lost contact lens,” muttered what some believe sounded like “Glory to my Lord Allah, the Most High Most Praiseworthy,” and left the room hurriedly.

Obama’s comments come in the wake of the weeks-long controversy over the Rev. Terry Jones’ plans to burn Qurans on Sept. 11 at his Dove World Outreach Center in Gainesville. Jones scrapped the event at the last minute after a slew of calls asking him not to burn the books, including ones from U.S. Defense Secretary Robert Gates, former President Jimmy Carter and hotel heiress Paris Hilton.

“Although we’re pretty sure Hilton was just trying to score some coke,” said Cpl. Tscharna Senn of the Gainesville Police Department.