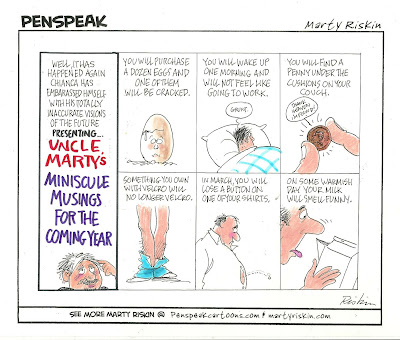 Every year I hear from people asking why I continue to offer up annual predictions, given that all it does is prove I have a complete lack of insight when it comes to current events, or have not been paying attention, or both. And I always have the same response: Why do you insist on bothering me during “Jersey Shore”?

With that in mind, here’s a look back on my annual predictions from a year ago. As you will see, my streak continues.

1) “This will be the year we stop getting so hung up on alternative energy and admit that you just can’t go wrong with safe, reliable oil. Drill baby drill!” Clearly I was a little off on this one, judging from the number of oil-stained hate letters I’ve gotten from turtles and egrets. But I was correct in my other oil-related prediction, namely that it would remain the home-heating method least likely to make your house explode.

2) “Facing evidence that the American public will never go for it and it would probably just make matters worse anyway, President Obama will abandon his plans to pass healthcare reform.” I’m taking credit for two out of three on this one.

3) “What’s that sound you hear? It’s the economy, roaring back to life!” OK, I might have been overzealous about that “roaring” part. I probably should have said, “creaking slowly and laboriously back to life, like an ancient lawnmower with a bum starter rope.”

4) “Enough with those stupid toys already — ‘Toy Story 3’ will be the biggest flop of the year.” Well, yes, it did wind up being the No. 1 movie of 2010, and the highest grossing animated film of all time. But in my defense, I didn’t really think it would flop in the first place — it was just a defense mechanism, because I knew it would probably make me sob like a little girl. OK, not “probably.”

5) “World Cup excitement will finally win over American audiences to the world’s most popular sport.” And it might have, too, if we weren’t so easily distracted by funnily named plastic horns. (“Listen! It made a silly noise!”)

7) “People will realize that the Tea Party movement is misguided and nutty, and as a result it will play no significant role in electoral politics in the mid-term elections.” I would like to go on the record that I was just joking about this, and I, for one, welcome our new Tea Party overlords.

8) “This will be the fifth straight year without a hit song by Train.” I thought I was pretty safe with this one. Curse you “Soul Sister” and your irresistible catchiness!

9) “The up-and-coming profession of the year will be mining, particularly in South American countries.” Well, events of the past year probably didn’t do anything to encourage more young people to pursue mining as a career option, other than in the towns where the choices are mining and starving to death (which, granted, is most of them). Still, things worked out pretty well in the end for the Chilean miners — one of them got to go to Graceland.

10) “Lady Gaga will appear in public wearing a dress made entirely out of meat.” I knew Lady Gaga wouldn’t let me down! That’s why next year, I predict she’s going to win the Mother Teresa Award.

Either her or that Snooki character.