This week's column:
This Bible may come up short 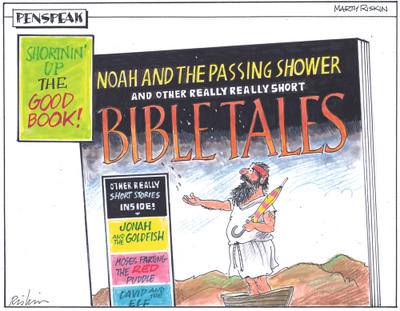 When I heard that someone had come up with an abbreviated version of the Bible I thought, this seems a little bit backwards. In this age of the director's cut, shouldn't they be making it longer? I'm sure there are a lot of extraneous subplots they could insert, like maybe a part where Abraham and Ishmael form Abraham & Son Jewelers. (That's not to mention the bloopers -- you just try saying "Nebuchenezzer" right on the first take.)

Apparently the idea behind "The 100-Minute Bible" is to make it so the average person can read it in, yes, 100 minutes. This is in direct contrast to the actual Bible, which to read cover to cover would take you until the sun became black as sackcloth of hair, and the moon became as blood (approximately). Granted, I suppose even a little Bible is better than none, but it seems to me there's got to be a reason God included all that stuff in the first place, or dictated it, or however it got in there.

Besides, I'm sure it would be a daunting task to determine what to leave out. It probably took long, heated debates among biblical scholars, all of them weighing the import of each individual chapter and verse. Unless the publishing industry was in any way involved, in which case it was decided by randomly chosen focus groups made up of people who, given their druthers, would rather be rating shows for UPN.

To read the rest of this week's AT LARGE by Peter Chianca, click here.