Column: You too can be a nuclear scientist! 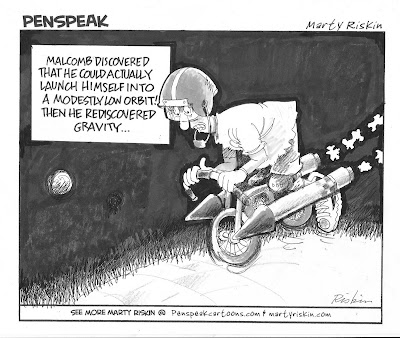 As my devoted audience — primarily my mother and a guy named Fred who added me to the mailing list for his conspiracy theory e-newsletter — may have noticed, I recently took about a five-month sabbatical from writing this column. I’d like to say I spent the time writing a novel, but unfortunately, certain circumstances prevented it. Damn you, Angry Birds!

Regrettably, though, it seems my break had an unanticipated side effect, namely that, from what I can tell, there was no local columnist available to comment on the Swedish man who was arrested last August after trying to split atoms in his kitchen. Fortunately his efforts didn’t result in a worldwide nuclear catastrophe, meaning I can still weigh in today on the concept of home atom splitting. So here goes: Don’t do it.

According to the Associated Press, Richard Handl, 31, spent months setting up a nuclear reactor in his home, and “only later did he realize it might not be legal.” This is very similar to the defense used by the guy who created Napster, except that a shared song file never carried with it the threat of mass annihilation, with the possible exception of “Heartbeat” by Don Johnson.

So what would make an otherwise normal, average, 31-year-old Swedish man bring radium, americium and uranium in his kitchen and use it to provoke a nuclear reaction? Apparently, he told the AP, he was only doing it “as a hobby,” and I can see how, much like fishing or macramé, it would be very satisfying for that split second before you’re incinerated.

But it’s worth noting that Handl didn’t just conduct illegal nuclear experiments: He also blogged about it, presumably hewing to the common truism, “If a man builds a nuclear reactor in his kitchen and nobody is there to blog about it, does it stiKABOOOOMMMM!!!!!” (Personally, I’d like to take this opportunity to note that blogging is perhaps the lowest form of personal expression, and that you can access mine at chianca-at-large.blogspot.com.)

Beyond the blogging, though, I have my own theory as to why someone might attempt to tackle do-it-yourself nuclear science: It’s part of living in a society where people have been conditioned to believe they can do pretty much anything without the need of professional intervention. Publisher, recording artist, developer of video games where drug dealers beat up strippers — all of these used to require years of specialized training. Now, there’s an app for that. (And by “app” I of course am using the modern shorthand for what used to be more commonly known as … wait, let me check my notes … “appaloosa.”)

Coming at it as I do from my perspective in the newspaper industry, part of me finds it to be a comforting development: Why should I be the only one getting put out of business by amateurs working from their kitchens? Let the nuclear physicists share some of the pain — by the end of the decade, I’d like to see every American making nuclear reactions in his bathtub, or barring that, gin. Which I do not believe is illegal, as long as you blog about it.

But on the other hand, I think in the end we’d be better off convincing these usurpers — the self-publishers, the would-be physicists, the wealthy fake astronauts, the people filming themselves in hotel rooms with night-vision cameras (you know who you are) — that all of these activities are better left to professionals with the training and expertise to do the job correctly.