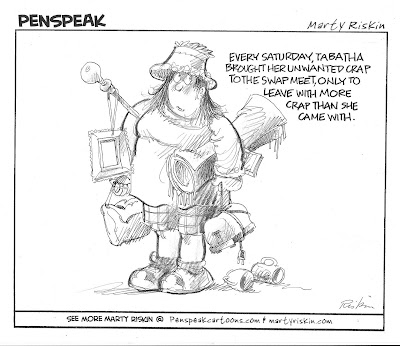 I should start off by saying I am not what you’d call a hoarder. Come in to my home and you’re unlikely to find the rooms and hallways piled up with old newspapers, products purchased from the Home Shopping Network and desiccated animal skeletons. Except for the old newspapers.

What I do have is an overabundance of entertainment items that somehow made their way onto my shelves despite their clear lack of artistic merit. There are the CDs I got just because the BMG Music Club was offering them for 1 cent (back when you used to have to pay for music), and the DVDs we bought for my kids when they were toddlers, because they pointed to them in the supermarket and we wanted to keep the shopping experience moving along smoothly, without having to involve security.

I know I could sell them on eBay (the CDs and DVDs, not the kids), but I don’t think I’m ready to become a full-fledged online retailer. I picture myself in my garage surrounded by boxes and packing tape, sifting through email orders and trying to squeeze in trips to the post office, where the clerks greet me with cries of “Hey, it’s eBay Guy!” I was hoping to save that for my retirement.

That’s why I was so intrigued when I heard about something called swap.com, which allows you to trade your stuff to other people in exchange for their stuff. This was more like it: It seemed somehow purer than just selling these things, and I figured it would prepare me for the inevitable period somewhere down the road (Tuesday?) when the world economy is based exclusively on barter, and banks are used primarily to house grain.

So I signed up, but immediately hit some unexpected bumps. For one thing, people seemed generally reluctant to trade me the cool stuff I wanted in exchange for the crap I had been considering throwing away. I was highly offended — who wouldn’t want to trade their copy of “40: A Doonesbury Retrospective” (list price: $100) for my copy of “Andre,” the 1994 movie about the seal who wears sunglasses? Or the “Karate Kid II” DVD I won in a PTA raffle? Or the Jonas Brothers CD we bought for our daughter during that tiny sliver of the pop culture time continuum when they were cool?

What’s even worse, several of the items I listed are being sought by absolutely no one in exchange for anything — for instance, not even a single shut-in was interested in my copy of “Rickles’ Letters” by Don Rickles. It was one thing when nobody wanted anything at our yard sale, since the audience for that stuff was limited to people in the general vicinity. But when you find out that the entire world finds your stuff even more useless than you do, it makes you start wondering where you went wrong in life.

Before long, you give up completely on your “want” list and start trolling the “What can I get?” list for anything that might remotely validate your self-worth. Only in my case that just made it worse, since it appeared that the only thing anyone was willing to trade me for my stuff was old Jennifer Weiner novels. Not that there’s anything wrong with that.

Soon I settled in, though, and I’ve now done several successful swaps, acquiring such things as the “Watchmen” graphic novel, a Gram Parsons CD and a DVD of “The Maltese Falcon.” None of them were on my “want” list, but I feel like I’m expanding my horizons, while at the same time getting rid of things like my DVD copy of “You’ve Got Mail.” (Which I suspect was carried into my home by romantic comedy elves and is not indicative of any sort of crush I might have once had on Meg Ryan. Or Tom Hanks.)

And the good news is, apparently swap.com will soon be expanding so that you can trade ANYTHING, not just entertainment items. When it comes to getting rid of your old stuff, that’s a game changer. I can only imagine the possibilities.

What do you think I can get for a pile of newspapers?