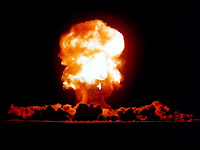 The sun is shining, the birds are chirping, there's a crisp fall feel to the air, and everything seems at peace in the world. And then you hear that a six-ton space satellite will be hurtling to earth any day now. Figures.

Before we all panic (as we are wont to do), there are a few things to keep in mind: Yes, scientists say that the potential strike zone "covers most of Earth." But "most" is not "all." So there's that.

As for your own chances of being waylaid by a hunk of space debris, here's what the experts have to say:

The satellite will break into pieces, and NASA put the chances that somebody somewhere on Earth will get hurt at 1 in 3,200. But any one person's odds of being struck have been estimated at 1 in 21 trillion.

Which are pretty good odds, unless you happen to be that one guy. And given that some of those pieces could be a good 300 pounds, according to estimates, it may be worth heading underground, just in case, lest you risk going out on a stroll and being turned into a pancake by the space metal equivalent of these guys.

Meanwhile, a small part of me hopes the thing lands here on the North Shore of Mass., just for bragging rights. Just as long as it doesn't hit anything historic.
Posted by Pete Chianca at 7:01 AM