COLUMN: Schools vs. the mosquitoes 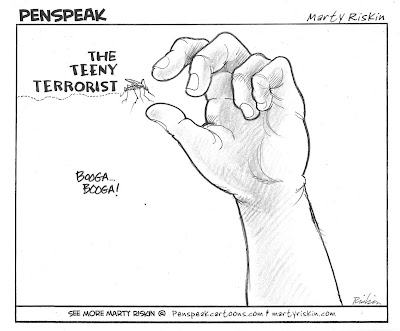 The following is (not really) a message from your superintendent of schools:

Hello parents! We hope you and your children are adapting well to another new school year. As you know, as a district we are dedicated to your children’s education, health and welfare, not necessarily in that order.

With that in mind, we have elected to cancel outdoor activities until further notice in the wake of the discovery of West Nile virus in a mosquito within town limits. According to the Department of Public Health, it was just a single mosquito, and since it was found in a car with New Jersey license plates it was likely driven here from out of state, possibly last year.

Still, we prefer not to take any chances and will be doing our best to keep your children from exposure to air, particularly outdoor air. To that end, we have canceled or postponed the following activities:

Rather than have children wait at or walk home from a bus stop, and ride in a bus in which mosquitoes can travel into the vehicle with the exhaust fumes, we ask that you plan to drop students off and pick them up inside the school. They can accompany you to and from the parking lot via the large airtight sterile tubes set up by our custodial staff, very similar to the ones used by the government agents in the film “E.T. the Extra Terrestrial.”

Meanwhile, the Department of Public Health has notified us that, in an effort to ensure public health following the discovery of the mosquito, it will be spraying the entire town with deadly chemicals this Tuesday. Officials have asked that while they spray, from approximately 7 a.m. to 4 p.m., residents remain sealed tightly in their homes, running their oven fans at “maximum.”

Until spraying commences, please make sure your children do not leave the house unless they are wearing long sleeves, long pants, long socks, ski hats and, ideally, plastic baggies around their hands secured by elastic bands. It is not recommended that you put baggies over your children’s heads unless you poke holes in them first, which kind of defeats the purpose. A better idea is probably to spray your child in the face with DEET.

Also, please remember to dispose of any sources of standing water around your home where mosquitoes might breed, like those old trash can covers and hubcaps that have been on your driveway since the late ’90s. You know who you are.

I acknowledge that we’ve heard complaints from several parents who have pointed out that they spent practically their entire childhoods outdoors, never used bug spray, and, despite coming home every night covered with literally dozens of mosquito bites, they never got ill. However, I would point out that times have changed, in that mosquito-borne illnesses are much more common, as are liability attorneys.

We hope that these minor inconveniences are short-lived and that the Department of Public Health will soon sound the “all clear,” allowing us to resume outdoor activities as usual. On the other hand, if they find any mosquitoes with Eastern equine encephalitis within a 50-mile radius, I should warn you we’ll be sending you copies of your children’s textbooks so you can home-school them in your boarded-up basement while we wait for the first heavy frost. See you next year!

Thanks for alarming my 82-year-old aunt who began making plans to leave town for the week to avoid the "spraying."

She arrived at a family event this weekend with a copy of the paper, seeking our guidance.

We advised her that you're a moron.