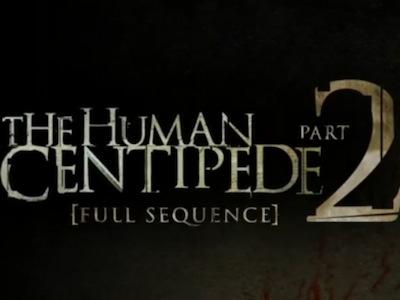 HOLLYWOOD (CAP) - Its plot is being kept strictly under wraps, but word leaked this week that party girl actress Tara Reid is looking forward to a career-boosting comeback with her role in Human Centipede 2.

"It's been a while since I've really stretched in a role," admitted Reid, who struck box office gold with American Pie and Urban Legend but lately has found herself in straight-to-DVD fare like 7-10 Split, Unnatural Causes and The Girl With The Raging Taboo.

"They told me that last one was based on a famous book series, but it turns out they meant the title just sort of sounded like one," she said, adding that she can't quite remember who "they" were.

Reid hopes to salvage her career in the sequel to last year's surprise cult favorite Human Centipede, about a mad scientist who sews his victims together to create a grotesque creature with a single digestive track. "I didn't see the first one, but I heard it made a really deep statement about people who turn other people into human centipedes," said Reid.

Reid declined to explain her role in Human Centipede 2, other than to say her character's name ("The Middle One") offers a clue. "I'm just starting to get feeling back in my mouth," she added.

Some have wondered why Human Centipede needed a sequel, given that it was almost universally derided as disgusting, amoral and not especially successful at the box office. But the film's producers say a sequel was a must.

"This was a story that demanded to be continued," explained Martin Shafer, president of Martin Shafer's Straight-to-DVD Movie Production Co., who recently stepped down as CEO of Castle Rock Entertainment when his Shawshank Redemption buddy comedy failed to materialize.

Asked point blank if he saw the original movie, Shafer paused for several seconds and then admitted that he didn't. "But I watched the trailer many times after I greenlit the sequel," he said.