COLUMN: To bee or not to (spelling) bee 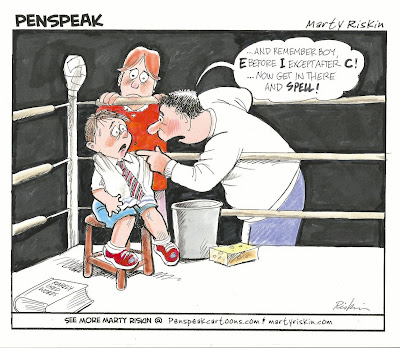 I have now been through three elementary school spelling bees, two with my daughter and one with my son, and each time I’ve wondered how this age-old tradition has managed to survive the movement to eradicate all vestiges of competition from American childhood. Clearly somebody’s been paid off.

Think about it: We don’t let kids count goals or runs scored, and routinely award them with trophies simply for showing up (or, if they don’t show up, we bring the trophies to their house later to show them there are no hard feelings). And yet the spelling bee continues, wherein we march 9-year-olds in front of an auditorium full of people and attempt to make them look stupid. It’s refreshing.

Actually, I’m kind of torn over the whole spelling bee concept. I’ve never been one of these parents who think that “everybody’s a winner,” which is a concept I think can be detrimental once a child grows up and discovers that life is all about being stomped on by the actual winners, who got that way because they inherited money, or are from China. On the other hand, spelling bees seem particularly cruel, especially on the parents, who spend the entire event sweating profusely and silently reliving their own childhood humiliations. (Er, not me. Other people.)

It turns out that for most parents, there is nothing good about a spelling bee. Besides being a nervous wreck, there’s all that time spent praying that someone else’s poor schmoe of a kid will be the first one to get eliminated, so you can put off the dashing of your own son or daughter’s childhood innocence for at least one more day. Eventually this leads to an unseemly feeling of glee when one of your child’s competitors gets stuck with encyclopedia or cupboard or delicatessen.

In fact, I’m not proud of it, but I think most parents would agree that it’s hard to get through a spelling bee without thinking of that famous quote by Gandhi: “The greatest happiness is to vanquish your enemies, to chase them before you, to rob them of their wealth, to see those dear to them bathed in tears.” Wait, that was actually Genghis Khan. But you get the idea.

As for the kids themselves, they run the gamut when it comes to reactions. You have the ones who have smiles on their faces the whole time, who are clearly delusional, and the ones who look like they’ve just gone through a question-and-answer session with Dick Cheney, who understand the gravity of their predicament. Then there are those who flub a word they were sure they knew, and their faces drop when they hear the bell, like poor Travis when he finds out Old Yeller has rabies.

On the plus side, pretty much all the participants who get through one of these things alive seem to feel pretty good about themselves afterwards, even if they get a word wrong eventually. True, both of my kids have been blessed with some mercifully easy words — my son got “kid” the other night, and had to ask the moderator if that’s what she actually said, in case she was trying to slip in some obscure homophone that sounds like “kid” but is actually spelled with an arcane series of unexpected h’s.

They’ve also gotten some tough ones, but my son said even though he had the jitters at the start, “It got easier every time I got up there.” By the end — he finished seventh — he was a model of poise, looking completely at home in front of a cafetorium full of people, and that alone was worth the effort no matter how far he got.

As for the parents … We’ll be home recovering if you want to stop by to deliver our trophies.