COLUMN: Glad that Bob Seger is still the same 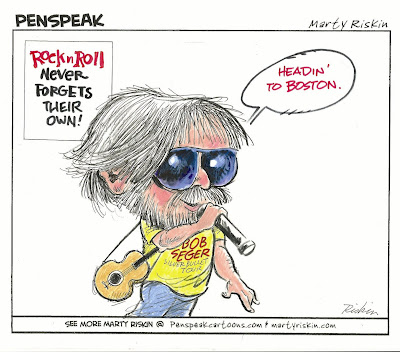 Back in the early ’90s I met a guy whom you might refer to as an inveterate hipster. He wore black horn-rimmed glasses, had an excellent leather jacket and declared that Bob Seger represented everything — everything! — that was wrong with popular music.

As I recall, he didn’t elaborate — inveterate hipsters are big declarers but not especially prolific elaborators — but I can assume he was of the opinion that, by releasing a series of derivative piano- and saxophone-laden “rock” albums about rocking and being nostalgic about rocking, not necessarily in that order, Seger was single-handedly barring the way for other artists who might otherwise be prone to introducing something vaguely original into the musical zeitgeist. (Hipsters love saying “zeitgeist.”)

My initial response, as a Seger fan, was to be offended. Frankly, I found the guy’s music mostly irresistible; his live mash-up of Chuck Berry’s “Let It Rock” and “Little Queenie” was like a duck-walk on steroids, and forever established Seger in my mind as a dedicated bearer of the rock ’n’ roll torch — one of “Chuck’s children,” as Seger himself referred to Berry’s disciples in “Rock and Roll Never Forgets.”

It probably didn’t hurt that I picked up my affection for Seger from my father, who played Seger’s “Stranger In Town” LP early and often during the late ’70s. My dad had a proclivity for keeping up with popular music; Seger, The Eagles and Rod Stewart were all favorites, despite his advanced age — 35, give or take — and it separated him from most of my friends’ parents, whose stations always seemed tuned to The Music Of Your Life, whatever (and whosever life) that was.

(An aside: I remember with some pride the time my friend Mark heard the opening chords of Journey’s “Escape” album and bounded up our stairs to find my father studiously reading the lyrics on the record sleeve; Mark was both delighted and flummoxed to find an adult who had somehow managed to avoid fogey-hood — it was like coming across a four-leaf clover, or a unicorn.)

Despite all that history, though, I’ll admit that eventually, not long after the hipster encounter —maybe because of it? — I found myself losing faith in Seger’s rock bona fides. Looking back, I had to admit that as the ’80s wound down, each of Seger’s albums had started to sound vaguely — OK, exactly — like the album before, just a little less so. (Quick, tell me the difference between “The Fire Inside” and “Like a Rock.” See?) In 1995 he released “It’s A Mystery,” which went gold despite the fact that nobody remembers it, and then he went on an 11-year sabbatical, and I can’t say I missed him that much.

At least I didn’t think I did, until 2006, when he released “Face the Promise,” and I was surprised to find myself inexplicably thrilled. I thought I had long relegated Seger to the pile of artists whom I had moved on from some time after college, right next to Billy Joel, Phil Collins and squarely on top of Huey Lewis. But I got the new album anyway, and though his rasp was a little croakier, it was as appealing as ever — and lo and behold, at age 60, his once-premature nostalgia finally made perfect sense.

It was also enough to make me revisit his old catalog, and wouldn’t you know it, it held up. Sure, “The Horizontal Bop” is just silly (if not downright juvenile), and we’re best to forget “Shakedown,” his biggest pop hit and only one without the Silver Bullet Band, whom we can only assume he dismissed because he was embarrassed about singing what should have been a Glenn Frey song. But “Sunspot Baby” still has that same bluesy drive; the live “Katmandu” retains its appealing frenzy; and the hits — “Night Moves,” “Against the Wind,” “Hollywood Nights” — evoke, well, yes, nostalgia, but also affection for an era when radio-friendly music at least tried to rock and roll.

The reason I bring all this up, of course, is that Bob Seger and the Silver Bullet Band recently announced another national tour, and he’ll be bringing his creaky 65-year-old self to Boston’s TD Garden in April. Wherever that hipster is today, he might say that the fact Seger still sells out arenas, where aging fans can wear their too-tight concert T-shirts and shake their fists to his bland rock retreads, represents everything that’s wrong with popular music today.

Tickets go on sale Saturday. Maybe my dad would like to go with me.

Read my musings on rock music at blogs.wickedlocal.com/springsteen.