COLUMN: Kids force you to face the music 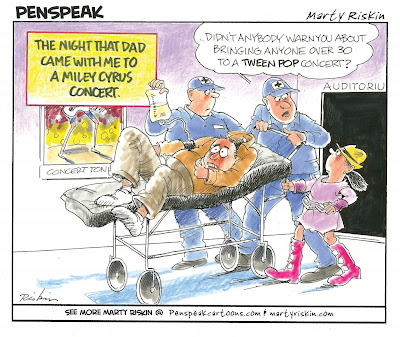 If you’ve ever been the parent of a toddler, you’ve probably experienced the urge to take Barney the Dinosaur, or each member of The Wiggles, or that marginal singer who took the gig singing “99 Favorite Nursery Rhymes” to keep from starving, and smother them to death under a Dora the Explorer pillow. Never fear: It’s very common, and no jury in the land would convict you.

It’s tempting to count the minutes until your kids grow out of the phase when this kind of music is their main entertainment option, but as more experienced parents will always tell you, you shouldn’t rush things — first of all, it won’t be long before every look they give you betrays their belief that their actual parents had been forced to sell them as babies to a roving pack of simpletons.

And in this case, beware that Barney the Dinosaur gives way to the likes of Miley Cyrus and Selena Gomez. If you don’t know who these two are, picture the Stepford children that used to hang around with Barney, and then imagine them as if they went through the trampy makeover that Olivia Newton-John got at the end of “Grease.”

If you’re like me, you may have had this misguided idea that as your kids’ musical tastes began to mature, they’d switch to genres you’d find more palatable in your car or household — maybe even including some of the contents of your own music collection. Surely all those years of playing Bruce Springsteen or Billy Joel or progressive rock from the early 1970s had an effect on them, at least subconsciously.

And it turns out you were right: It caused them to hate it.

Sure, I see people with their 8-year-olds at Springsteen concerts now, but they’re the exception; I suspect they’re part of some obscure Mormon splinter sect practicing their brainwashing techniques. Most kids are probably like mine, who view the idea of a Springsteen concert as a sort of sixth circle of hell, like the island in “Pinocchio” where the kids get turned into donkeys.

No, instead they’ve somehow gotten into their heads a penchant for bubblegum pop and dance music. I can blame my daughter’s affection for Miley on Disney’s ubiquitous marketing machine — after all, I’m just one man. But how both she and my son fell for the Black Eyed Peas is beyond me; I rarely let them listen to Kiss 108 for more than the minute it takes to figure out we’re listening to a song about some activity I don’t even want my kids to know exists until they’re in their 20s.

The also don’t get the idea of volume — not loudness, but capacity. I recently helped my daughter load her new iPod Nano, which holds 2,000 songs, and she was extremely picky about which tracks to include.

“Why would I want to put on a whole bunch of songs I’ll never listen to?” she asked.

“That’s the whole idea!” I responded, waving the sleek purple device in front of her face. “The whole point of the iPod is to have hundreds of songs you’ll never listen to! But you could listen to them if you wanted to.” That’s when I got the simpletons look.

I guess kids will always rebel against their parents’ musical tastes, but even if I like guitar rock and they like auto-tuned dance tracks, I figure the fact that we’re all appreciating some kind of music is cause for hope. And that’s not to say there isn’t any common ground, either.

For instance, we all hate Barney now.

This column appeared originally in West of Boston Life magazine and North Shore Sunday. Peter Chianca is a managing editor for GateHouse Media New England. Follow him on Twitter at twitter.com/pchianca. To receive At Large by e-mail, write to info@chianca-at-large.com, with the subject line “SUBSCRIBE.”