COLUMN: The future according to you (and Pew) 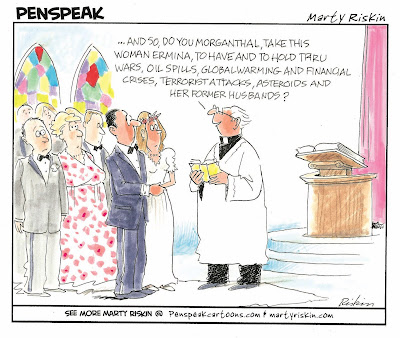 OK, I’ve finally decided on my new career, if and when the only remaining newspaper is sealed in glass in the Smithsonian Institute, next to Fonzie’s jacket. I’m going to pursue a position at the Pew Research Center, where they get to think up questions to ask average Americans, and then sit around high-fiving each other over how nutty the answers are. Also, I suspect they might be drunk.

Backing up my theory is a poll the center released last week, featuring predictions about the near future made by “the majority of Americans.” This despite the fact that I’m pretty sure the majority of Americans couldn’t even tell you what’s coming up next in their Netflix queue. (For instance, I had no recollection of adding all those Meg Ryan movies to mine, and you can’t prove that I did.)

Seems to me they’d want to poll people with actual working knowledge of what might happen, like scientists, or psychics, or the next president of the United States, Sarah Palin. I’m assuming that’s whom the 89 percent that predict a female president are referring to, particularly given that the other 11 percent have moved to Canada.

Instead, they ask average people who seem to base most of their opinions about the future on the “Terminator” movies. For instance, 81 percent think that computers will soon be able to converse like humans, which may or may not lead to the massive world war that 58 percent of respondents are anticipating. At the very least it should lead to computers gossiping and getting into pointless arguments with each other, just like humans but cooler, because they’ll have lasers.

In addition to World War III, many people pointed to the likelihood that we’ll be blown up by terrorists and/or that China will take over as the world’s superpower, meaning your Mandarin-to-English phrase book will finally come in handy. And 31 percent think the earth will be hit by an asteroid — you can tell who those respondents are by looking for the people blowing their 401Ks on beer and chocolate.

But it’s not all doom and gloom: Many respondents predict that it won’t be long before extinct animals are brought back by cloning, we find evidence of life on other planets and science develops a cure for cancer. Of course, since these people have no science background that’s mostly wishful thinking; they would probably also predict a future in which the entire population of the earth becomes good-looking. And granted the alternative would be disturbing, i.e. that we all still look like we do now.

It’s possible that these polls are better at gauging public opinion than at prognosticating. For instance, it’s telling that while 83 percent of Democrats are concerned about global warming, only 48 percent of Republicans are. This despite the fact that global warming could melt the icecaps and release the frozen cavemen riding dinosaurs that God put there when He made the earth 6,000 years ago. (Just ask President Palin.)

What’s most troubling, though, is that the number of people optimistic about the future is down 20 percent from 1999. While that makes sense for those of us in the print newspaper industry (which 64 percent of people feel will disappear by 2050), I think the rest of you should buck up! We should just all promise to get along, be productive and do our part to ensure a happier, healthier future.

Our computer overlords wouldn’t want it any other way.

Your site is very useful in terms of cultural exchange.Thank you.