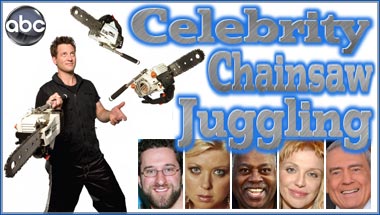 HOLLYWOOD (CAP) - An injury suffered by Baywatch star Nicole Eggert on ABC's reality diving show Splash - the latest in a series of mishaps on the set - has producers rethinking plans to go forward with Celebrity Chainsaw Juggling, set for debut this fall.

"Up until now, we hadn't really thought beyond the fact that putting B-level celebrities in situations where they could be gravely injured or killed was ratings gold," noted Chainsaw producer Martin Shafer. "Well, okay, C-level celebrities."

However, "We never really thought about what would happen if they were actually gravely injured or killed," Shafer said, acknowledging that it would probably still boost ratings, but only temporarily.

In the show, world famous juggler Michael Moschen was to train the celebrities on dangerous juggling tricks, starting with maces and axes and working their way up to flaming chainsaws.

"It probably wouldn't be good if Dan Rather wound up on the business end of a flaming chainsaw on national TV," admitted Shafer, noting that if it were Sam Donaldson it would be a different story.