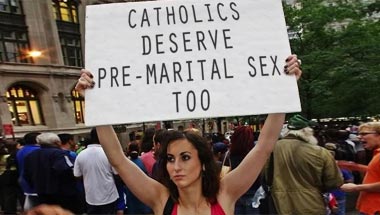 WASHINGTON (CAP) - American Catholics this week, while generally happy with the newly elected Pope Francis, expressed disappointment that the new head of the Catholic Church insisted on espousing such Catholic views.

A new study out of the Pew Research Center said that while 74 percent of American Catholics approve of Archbishop Jorge Mario Bergoglio's appointment as pontiff, almost 60 percent wished he held different views on abortion, premarital sex, contraception and same-sex marriage.

"Just once I'd like to see a pope who didn't have a problem with premarital sex," said Carole Thomson, 29, who describes herself as a "devout Catholic" who nonetheless has never married and has had 19 sexual partners, some of them women.