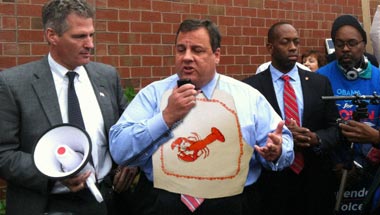 FRAMINGHAM, Mass. (CAP) - Sen. Scott Brown was joined yesterday on the campaign trail in Framingham by New Jersey Gov. Chris Christie, one of the nation's leading champions of balanced budgets and government reform.

There, Christie praised Brown's bipartisan record and his ability to work with Democrats to solve problems, and then swallowed him whole.

Witnesses say Christie extolled Brown's bipartisan efforts in the Senate, and then unhinged his jaw, not unlike a giant, corpulent serpent, and ate Brown from the head down, slowly drawing the senator into his tremendous gullet and digesting him over a period of several hours.

Christie, who was named the "least scary" and "fattest" potential GOP presidential contender in a USA Today/Gallup poll in August of 2011, has only rarely eaten his fellow Republicans, but today reportedly went on stage hungry after missing his usual lunch of 2,625 pounds of zooplankton.

"I really respect Christie's positions on fiscal issues," noted Cyndi Carlson of Sherborn, Mass., who added that she'd been undecided until Christie's endorsement prompted her to go for Brown. "Until Christie ate him, that is. I guess I'll have to vote for Elizabeth Warren now."

Need To Boost Your ClickBank Traffic And Commissions?