At Large Fake News Tuesday: Romney To Move US In New Direction Via Tugboats 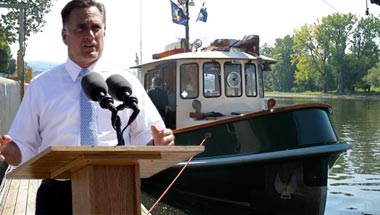 DAYTON (CAP) - Claiming President Obama's policies are bringing us "closer to Europe," GOP presidential contender Mitt Romney says that if elected, he will move the country in a new direction using a fleet of giant tugboats and massive cables affixed to the West Coast.

"Every day, President Obama's failed economic policies are taking us squarely in the direction of Europe," Romney told a crowd during a campaign event in Troy, Ohio. "As soon as I get into office I will start moving this country in a new direction, namely west.

"Every inch we move this nation away from Europe is another inch away from socialism and debt crisis," Romney added. "Plus, we'll be that much closer to China, where we've sent most of our jobs."
Noticing the horrified looks from his aides, he quickly added, "Er, not me, of course ... other people."

Although he admitted the prospect of dragging an entire country even a short distance was "a massive undertaking," Romney said, "most Americans are looking for a new direction, and as my father used to say, there's nothing we can't do if we have the right leadership and enough tugboats."

Romney said the project would also be a job creator, noting they'd have to manufacture hundreds of massive tugboats approximately three to four times larger than a typical ocean liner, as well as miles and miles of super-high-tensile cable.

"Plus some kind of really long stakes or something to tie it to, probably," he said.

The proposal comes on the heels of criticism that Romney has spent too much time criticizing the president's "failed policies" without offering concrete plans of his own. In recent weeks he has also proposed programs that would:

- Employ thousands of carpenters, woodworkers and tree surgeons to make all the trees in the U.S. the "right height."

- Provide citizenship cards, driver's licenses, voter registration and Spotify accounts to all corporations, on the grounds that they are people.

- Install airtight dog carriers on the top of every American-made vehicle.

"And they work for your grandchildren too!" Romney quipped.