Column: Something's wrong with my radio 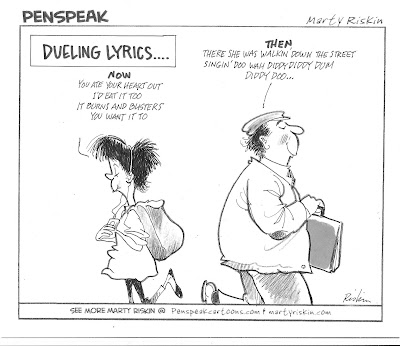 One interesting aspect (and there are many) of having a daughter rapidly approaching her teenage years is that I get a firsthand glimpse into what music “the kids are listening to.” That way when I saw a possessed Nicki Minaj grinding against fake monks and priests on the Grammys I was only mildly traumatized, as opposed to some other people over 35, who are still curled up in the corner of their divans, muttering to themselves.

We spend a lot of time in the car listening to top 40 radio, although I’m not sure what makes a song “top 40” these days. (Number of downloads? Most views on YouTube? Ryan Seacrest breathing on them? It could be anything.) I should mention that I had planned to be one of those parents who were hip to their kids’ music, until I heard it and my eardrums shriveled up like snails in beer.

For one thing, none of today’s music seems to have any guitars in it, or if it does you can’t hear it over all the drumbeats and synthesizers and the rapper who comes in after the second verse. It’s perplexing — without guitars, how do aspiring musicians expect to impress girls? By talking into the Auto-Tune app on their iPhones? For crying out loud, I could do that.

But when I thought closely about my critiques, I realized a few things:

1) I’m this close to turning into Grandpa Simpson, muttering on about my pills and how I used to wear an onion on my belt.

Not all of it, mind you — not Bruce Springsteen or Dire Straits or anything from the “Back to the Future” soundtrack — but some of it was just as inane as anything you hear on the radio today, and yes, I’m talking to you, Captain and (to a slightly lesser extent) Tennille.

Of course, I was fortunate to have grown up in an era when radio stations played more than one style at a time, which would explain why when I think about my childhood it has “American Pie,” “Rubber Band Man,” “I Will Survive” and “The Devil Went Down to Georgia” playing in the background. Between that and the pants my mother put me in it’s no wonder I still wake up sweating.

But I don’t think I felt the full impact of modern music until someone thought it would be a good idea to install a jukebox in the middle school cafeteria. I can only presume this was done to raise money and not to introduce us to the collected works of Shalamar, but apparently the PTA couldn’t see far enough past all those shiny new quarters to anticipate the obvious: that it would take the sixth grade about 12 minutes to figure out which songs were the most suggestive, and then play them constantly until the end of time.

There were a few options that made it into heavy rotation — “Makin’ It,” “Le Freak” (it was French — it had to be dirty) and pretty much everything by Blondie, who was clearly a wanton woman, even though as it turns out she wasn’t a she but actually a band. But as the eventual non-stop, play-on-repeat favorite, the sixth grade finally settled on “Good Girls Don’t” by The Knack, which included the popular refrain: “Good girls don’t … but I do.”

Don’t what? Do what? We had no idea, other than that it had to be something inappropriate for consumption in a middle school cafeteria. More quarters!

The jukebox didn’t even come close to lasting the whole year, although we never found out who was behind its removal. (I always suspected the math teacher, Mr. Rose, who was apoplectic over the fact that we couldn’t seem to understand “We don’t need no education” was supposed to be ironic.) But not before I got to hear all sorts of music, some of it good (Queen, Pretenders, Tom Petty), some of it bad (Leif Garrett, Anne Murray, whoever sang “Biggest Part of Me”), but all of it mine. Well, ours, if you include all the other sixth-graders who had no idea what Kool and the Gang meant by “Ooh La La.”

And so now, my daughter has music that’s hers. Some of it, like Adele and Lady Gaga, I can appreciate. Some of it, like Rihanna and Lil’ Wayne, sets off my built-in parenting alarms and sends my hand screaming toward the station dial. And some of it, like any song sung by a child whose day job is acting on the Disney Channel, strikes me as what I imagine a carbon monoxide alarm must sound like to a Sheltie.

But as mine did, my daughter’s tastes will mature over time (I’m hoping in a direction that has guitars in it), and for better or for worse, these songs by LMFAO and Drake and Katy Perry will someday make up the soundtrack of her adolescence. And like me with my mish-mosh of teen music memories, she’ll look back on them fondly, no matter how bad they may be.