COLUMN: No way to treat a Lady Gaga 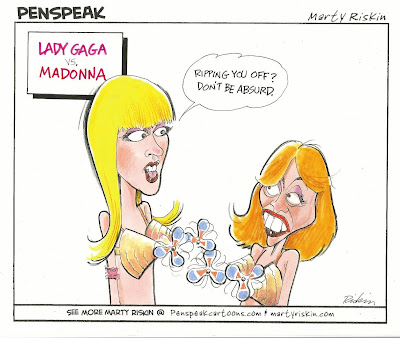 There comes a time in every columnist’s life where he must take a stand, one way or another, on Lady Gaga. If Walter Winchell were alive today, I’m reasonably sure he would agree with me.

The only problem is, believe it or not, I’m torn on the Gaga issue. On the one hand it would be very easy to dismiss a woman who goes out in public wearing bubbles and metal breastplates and meat (not at the same time, probably) as an artist for whom “the music” isn’t a top priority. On the other, I heard her single “Born This Way” once and it attached itself full-on to my brain, possibly entering through my nasal cavity like the creature in “Alien.”

With those things in mind, I’ve decided to do what every good journalist should; namely, make a list of pros and cons and, after considering them carefully, come down on the side I consider to be most offensive to Republicans.

So here we go:

Pro: Lady Gaga is a better singer than Madonna. I’m talking about sheer vocal ability, not things like phrasing and breath control, which are hard to think about when you’re covered with meat. As you’ve probably heard, some say “Born This Way” is a rip-off of Madonna’s “Express Yourself,” and in fact, this week a PR woman offered me the chance to analyze both songs note by note with an instructor from SAE Institute of Audio Engineering. I declined, opting instead to coax a cat into clawing out my eardrums.

Con: Lady Gaga is NOT a better singer than Edith Piaf. This may be true, but I would have liked to see Edith Piaf croon “La Vie En Rose” in a clear plastic dress with black electrical tape across her bosoms. Probably more than I care to admit.

Pro: Lady Gaga has professed herself to be “a huge Bruce Springsteen fan.” She even got Springsteen saxophonist Clarence Clemons to play on her new album, which for me is a bizarre collision of worlds — sort of like when Bob Dylan did that Victoria’s Secret commercial, although thankfully not in a clear plastic dress.

Con: Lady Gaga got into a public feud with “Weird Al” Yankovic. They’ve since worked things out, and Gaga is allowing Yankovic to go forward with his parody of “Born This Way.” Which is good, because I’d have to take Al’s side in that dispute — he remains the most famous person I’ve ever interviewed, primarily because Pee-Wee Herman won’t take my calls.

Pro: Lady Gaga is not afraid to promote personal expression by wearing bubbles and metal breastplates and meat. This is in stark contrast to more conventional performers, such as Rod Stewart, who has spent the last 30 years wearing the same Rod Stewart costume.

Con: Lady Gaga’s “Bad Romance” video inspired thousands of fans to start wearing enlarged “circle” contact lenses, creating an entire generation of teenage girls who look like Bratz dolls. This would seem to indicate that it’s only a matter of time before her “Little Monsters” are also regularly engaging in hair sculpting, eye stretching and thigh elongation.

Given that, along with the fact that I have a daughter whose teen years are bearing down on both of us like a hormonal freight train, I think in the final analysis I have to deny Lady Gaga my full support — at least until she tarts it down a bit. Call me old fashioned, but even if I had her talents, you wouldn’t see me dancing around wearing nothing but lace body suits and police tape.

On the other hand, I’m reasonably sure you wouldn’t want to.