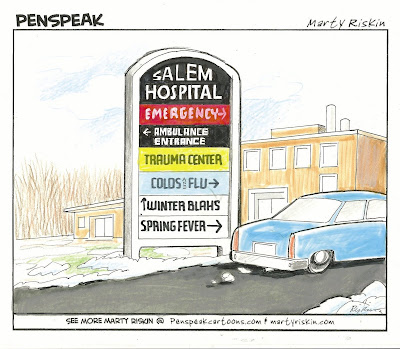 It was Mark Twain who said, “It’s spring fever.... You don’t quite know what it is you DO want, but it just fairly makes your heart ache, you want it so!” And given the fact that he has a bestselling book out even though he’s been dead for 100 years, I guess you have to give the guy some credit for not being an idiot.

For me, it usually takes at least until mid-February before I start peering wistfully through the frost on my living room window, imagining lush green grass instead of layers of snow. Never mind that under that snow is grass a leathery shade of brown and leaves that I never got around to raking up last fall. It’s the idea of green grass that gets me nostalgic for spring, not to mention the fact that my nose has probably frozen to the windowpane.

But this year, that feeling was already prevalent by the end of January, when all the snowstorms had made the average trip down my driveway like a run through the Death Star trench. Every time I visited the mall I got nervous that one of the giant piles of snow that had been plowed into a corner of the parking lot would fall over onto my car, and they’d find me in it after the spring thaw, sucking on old Happy Meal wrappers.

But spring fever isn’t just about putting the winter behind you. It’s about convincing yourself that once spring arrives you’re actually going to go out and do spring-like things, like taking a state park flower tour in order to sniff in the nectar of the budding season. Then spring actually comes and you suddenly recall your deathly fear of bees, and the fact that baseball is on TV.

But we at least occasionally do make good on our plans to get outdoors and embrace the onset of spring, and by “we” I mean those of us who have been trapped in the house with kids for three months. That’s what motivated my wife and me, for instance, to trek the family out to the Ipswich River Wildlife Sanctuary one March Sunday several years back: to show our kids that if they think all their old video games are boring, just wait until they’ve watched an entire bucket of sap drip out of a sugar maple.

Spring fever also has a share of romance to it — my wife and I had our first date in springtime walking around Lake Quannapowitt in Wakefield, which would have been much less dreamy if we’d been in snow up to our thighs. But springtime is just generally more conducive to love, if only because when you try to hug during the winter in all those layers, you tend to bounce off each other like the fake sumo wrestlers at Lowell Spinners games.

But here in New England, maybe the fact that spring arrives at all is enough to justify a hearty bout of spring fever. It could be that Twain’s elusive thing we want is just evidence that we pulled through another winter, proving our resilience in the face of adversity and spurring our annual rebirth.

And I’d run right outside and enjoy it if baseball wasn’t on.