COLUMN: Sick of snow? It's always summer in Hollywood 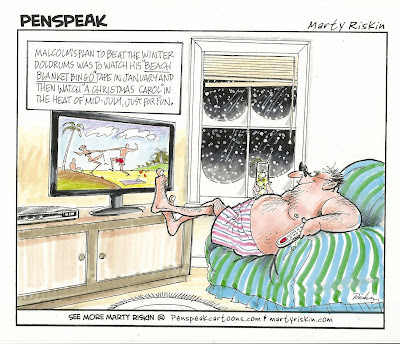 Given that as I write this, the forecast for the week is a steady snow starting on Tuesday and tapering off sometime in 2013, I have decided to spend the remainder of the winter in Aruba. Unfortunately, like James Taylor with Carolina, I can only afford to go there in my mind, where the airfares are cheap and I look much less globular and pasty while sunbathing.

But imagining I’m warm and that my lawn doesn’t resemble the surface of the moon only goes so far. I find it’s also helpful to tune into some movies that put me in a more summery mood and remind me that in just a few short months I’ll be back at the beach, where I will be chewed to death by a giant shark.

But even if “Jaws” (1975) has many of the elements that epitomize the summer movie, including sand, surf, skinny-dipping and Robert Shaw being bitten in half, it’s missing one important component of all great summer flicks: Bobcat Goldthwait in a Godzilla costume. Also Annette Funicello, but mostly that first thing.

That’s why the better movie — “better” in the sense of it being much, much worse — is “One Crazy Summer” (1986), which is director Savage Steve Holland’s less well-known companion to 1985’s “Better Off Dead.” It may not have the same off-kilter genius of “Dead,” but it does have the same star in John Cusack, and also the aforementioned Goldthwait scene, which may be his crowning achievement (apologies to “Police Academy” 2-4). Local bonus: It takes place in Nantucket and was filmed on Cape Cod, which tends to be a beautiful area once it thaws out.

Another way to beat the winter blues is to watch summer movies that take place during high school, which remind you that even though you may be freezing now … at least you’re no longer in high school.

Two of the best are George Lucas’ “American Graffiti” (1973) and Richard Linkater’s “Dazed and Confused.” (1993), which both follow summer-night adventures of teenagers, in 1962 and 1976, respectively. “Graffiti” is the more classic of the two, a shambling masterpiece that shows that there was a time when Lucas seemed to have some idea of what real people actually speak like. “Dazed” has its merits as a summer movie, though, including an early appearance by Matthew McConaughey, a summery actor if there ever was one, and lots of 1970s tube socks.

Of course, summer movies don’t have to be goofy — sometimes they just need to be sweaty. I suppose Lawrence Kasdan’s “Body Heat” (1981) would fall into that category, although I’ve never actually watched that one, mainly because I have an aversion to seeing William Hurt (1) in a pencil-thin moustache and (2) perspiring.

I have seen “The Big Easy,” though — that’s the 1987 New Orleans-set crime flick featuring sweaty Dennis Quaid, sweaty Ellen Barkin, sweaty John Goodman and even sweaty Ned Beatty. It also happens to one of the sexiest, funniest police thrillers of the 1980s, thanks to Quaid and Barkin’s easy chemistry; with all due respect to the almost equally snappy relationship between Mel Gibson and Danny Glover in “Lethal Weapon.”

My favorite choice for a summer thriller, though, has got to be Hitchcock’s “Rear Window” (1954). Like us during one of this winter’s blizzards, Jimmy Stewart is stuck at home, except he’s there because his leg is broken. Sure, he’s itchy and sweaty, and spying on his neighbors eventually prompts Raymond Burr to break into his apartment and try to throw him out the window. But on the plus side, he gets regular visits from Grace Kelly. It’s a decent trade-off.

I plan to have all of these handy during this week’s latest snow-in — I figure if I pull the shades, crank the heat and get cinematically summer-ized, it will help get me through until the real thing comes around. Which I hope is soon: Aruba in my mind is starting to resemble the beach scene at the end of “Planet of the Apes” (1968).

I just hope I don’t look too pasty in my loincloth.

Its definitely more exciting weather than we get in England... :P