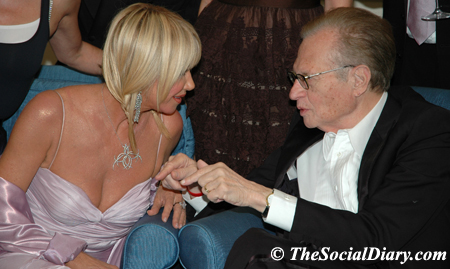 "My client was horrified to discover that her husband had mistaken her for Ms. Somers," said attorney Sol Rothstein, who successfully represented Mel Gibson's former wife Robyn in their divorce proceedings. "He blamed his researchers, but we suspect he just wasn't paying attention."

Southwick says she got suspicious when, over breakfast one day, "Larry looked up from his blintzes and asked me, So, what was John Ritter really like? I told him I'd never met John Ritter.

"Then he said, Here's a question from the Twitter: Suzanne, I'm 45 and overweight, would biodenticals work for me? I said, 'Larry, my name is Shawn!' And he just said, Really? Well waddaya know about that? We'll be right back! Then he asked for more blintzes."

Records indicate that at various other times during their 13-year marriage, King, 76, may have also mistaken Southwick for Sharon Stone, Kathy Griffin, Liza Minnelli and Bill Maher.

King would also occasionally tell Southwick that she reminded him of his wife. When she would respond that she in fact was his wife, King would allegedly say, "Seattle, you're on with Nancy Sinatra!" and disappear from the room.

Rumors have linked King to an extramarital relationship with Southwick's sister, Shannon Engemann, but both Engemann and King have denied the affair.

"He may have schtupped the sister once or twice, but only because his researchers told him that she was his wife," said King's attorney, Alan Schwartzbaum, who recently won a $3.1 million settlement for John Mayer's penis. "Have you seen the two of them? I know I can't tell them apart."