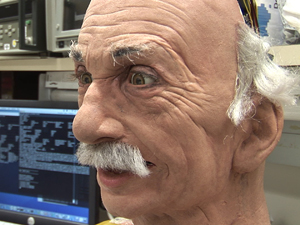 You may recall my recent concern over the robot teacher being tested in Japan. I was worried that it might not be as effective as a real teacher, and also, it might represent the first wave of our eventual enslavement by killer cyborgs. Taken together, those things spell "red flag" to me.

But as it turns out, the Japanese aren't even all that when it comes to robotics. Right here in the good ol' USA -- at U.C. San Diego, to be precise -- they've already overtaken the Japanese, designing a robot with 31 motors in the face, not just 19, that can READ facial expressions, not just mimic them. All at the bargain price of $75,000! If it could only play baseball you could replace the entire Red Sox starting lineup for less than we're paying Manny Delcarmen.

And as if that weren't enough, it doesn't look like a QVC host like the Japan model -- it looks like Albert Einstein! See the amazing and yet still vaguely creepy video here. And the best part is, you'll notice it has no arms and legs, making its potential role in world domination marginal at best.
Posted by Pete Chianca at 3:05 PM