COLUMN: A tribute to the tribute bands 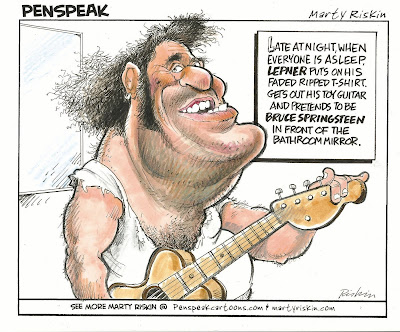 As many people who know me can tell you, I’m something of a fan of one Mr. Bruce Springsteen. It’s not like I go around broadcasting it or anything — I just have all his albums, have seen him in concert 10 or 15 times, write a blog about his achievements and spend most of my off hours wearing a white muscle shirt with the sleeves rolled up and a folded bandana wrapped around my forehead.

OK, maybe that last one is a bit of an exaggeration (and he hasn’t worn the bandana since 1985, people — get over it!). Regardless, I’m not alone; almost 40 years into his career, Springsteen still has millions of fans who buy his albums, see his concerts and spend their Saturday nights in theaters and bars watching Bruce Springsteen impersonators. Well, in the case of that last thing, maybe it is just me.

Yes, I’ll admit it: I have seen more than one Springsteen “tribute act” in my day, and plan to do so again this weekend, when New Jersey’s own B Street Band comes to town. I do this with full knowledge that there are hundreds of artists out there performing original material, and that one of them might turn out to be the next Bruce Springsteen. And yet I choose to spend my time and money seeing someone intent on being the current Bruce Springsteen, and even that only if you drink enough and squint.

I can’t disagree that there’s something vaguely unseemly about the whole tribute act concept, which may have begun in the ’70s with “Beatlemania” — I didn’t see it, but I’m pretty sure it featured Beatles look-alikes preserved in amber for future cloning. Then came the Elvis impersonators, whose efforts may have culminated in the work of “El Vez,” the entertainer who bills himself as “the love child of Elvis and Charo.” I saw El Vez perform in a bar in Somerville, Mass. more than 15 years ago, which would seem to indicate that I might have some sort of deep-seated chronic problem.

From that point it was only a matter of time until the world welcomed the 23 pages (!) worth of tribute acts listed at tribute-band.com. Many of them imitate superstars of the ’70s and ’80s, which is understandable, since these days it’s very difficult to get a ticket to see, say, the actual 1974 lineup of Led Zeppelin. But a lot of them are less obvious — for instance, did you know there are at least five working bands that bill themselves as tributes to ’90s heavy metal act Tool? Suddenly, El Vez is probably sounding pretty good.

I realize it’s hard to justify spending my hard-earned concert budget on bands pretending to be other bands, but I can’t help it — I still got a tingly feeling when I heard that a Billy Joel impersonator might be playing about a quarter mile from my house later this fall. After all, if I went to see the real Billy Joel, I’d have to drive to Boston or Foxboro and pay a fortune, and then I’d have to watch the current Billy Joel, who despite all the money I spent on his albums didn’t have the decency to keep his hair. If he looks like that, how must I look?

And while modern Springsteen concerts are still as good as ever, when I go to see the B Street Band this weekend, I’ll be driving just a few minutes, have plenty of free parking and be up close and personal with the band, which is much tougher to pull off at Gillette Stadium. (At the B Street Band’s local show last year my wife wound up on stage with a tambourine during “Rosalita,” but I promised never to talk about it.)

If you’re still skeptical, I’ll make you a deal: I’ll go see the next big up-and-coming young original artist if you join us at the B Street Band concert this weekend. Call me stuck in the past or unhealthily Springsteen-obsessed, but I predict you’ll be holding up signs with requests on them and rushing the stage with your fist pumping to “Badlands” by the end of the night.

Although just in case, don’t forget drink and squint.